Haven’t worn this in forever but I love everything about it. I mean, just check out the bottle:

How cute is that? The little bustle in the back! I’m a sucker for packaging, and Nfu-Oh has awesome packaging in spades. I got #52 here when I was first getting into my “collecting” stage of nail polish (I’ve always liked crazy polish, even as a kid, but around 2009 I started to morph into the addict I am today) and it was my first expensive polish. I got this, the famous flakie 51, and two holos, 61 and 62. They were about $12, I think, and I debated buying them for SO LONG because omgggg that was so expensive for a nail polish, it probably wasn’t worth it. (Oh how times have changed!) The free shipping won me over, I think. Anyway, Nfu-Oh has since discontinued their flakie line, so I’m glad I got this little guy back when I did!

Note: I apologize for the photos in this post – I’ve been really busy all weekend, mostly outdoors, which means I haven’t had much opportunity to attempt nice photos so I’ve just snapped ’em wherever, which is why the lighting is wildy different and also why there’s some tip wear in some photos. And as usual, the despite my best efforts my cuticles are pretty dry, argh. I promise my next photos will be much nicer!

52 is an indigo jelly with green/blue shifting flakes. It’s pretty sheer, and I’m lazy which means I like to layer anyway, so I put two coats of 52 over one coat of Revlon Posh, a bright green. I tested it over a few blues on some paper but the cool murky green-blue base got lost and it just sort of looked like I’d put Zoya’s Maisie over them. Over green, though, you can see the changing colors of the base, and that combined with the flakes suspended in each layer makes it look mermaid-y to me.

As you can see, the colors of the flakes change from green to turquoise/teal to blue and at extreme angles, deep royal blue. I included of the royal blue shift below. There’s really not much else to say about 52 besides YUM. So very pretty, but not in an over-the-top, super eye-catching way. Heaven knows I love me some loud polish, but sometimes it’s nice to have something quietly pretty on your nails, you know? 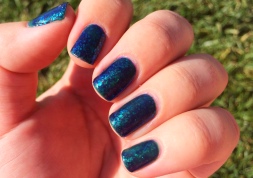 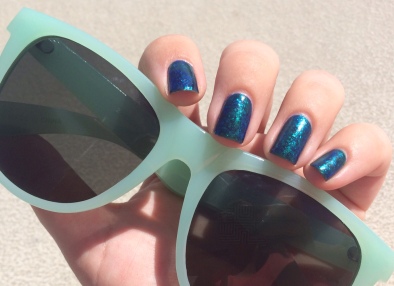 I’m not sure if I’ll be able to change my manicure to something appropriately St. Patrick’s Day themed before tomorrow, but there’s green in this so that counts, right? :) Thank you for reading! See you next time – A x