I started following Make It Stick on Instagram and a week or so ago they posted about a sale they were having. I do a lot of tape manis, so I loved the idea of having pre-cut shapes at my disposal and ordered a few designs.

My order came in a fabulous pink package including a business card with tips on the back and a piece of gum, how cute!

My order shipped quickly so I got it a few days ago and couldn’t wait to play! I also wanted to use a few polishes I’d recently bought, and so this is the combo I came up with:

I’m not sure why I bought this Essie – as is well documented on this blog by now, I’m not a red/coral person at all. But something about this little guy popped out at me every time I visited my fav nail supply store, so when I was there last weekend I decided to just finally buy it. And I like it a lot! I knew I wanted to use it with a dusty blue, so I chose Electric Beat. I own almost every polish from China Glaze’s 2012 Electropop collection, but I only got Electric Beat and its cousin, Kinetic Candy (a lighter version of the same color) a few months ago because those kind of blues aren’t normally my jam; however, I’ve used both a lot since acquiring them. I think this cornflower-y blue and the bright coral-orange work really well together here!

I almost just used Come Here! and Electric Beat with the chevron tape by themselves, but then I thought breaking them up with a neutral color would look better, so I chose my old buddy My Vampire Is Buff. I used two quick coats (would’ve done another if I was wearing it alone due to slight streakiness) and a layer of Seche Vite, then waited about an hour to add the tape and additional layers of polish – I tried it on a finger on my left hand after only about fifteen minutes and when I removed the tape, it pulled up my base layer of MVIB. :/ Since neither Come Here! or Electric Beat are normally one coaters, I did one super thick coat over the tape in an attempt to get them completely opaque, but as you can see in the closer photo below, that thicker coat meant my lines weren’t 100% crisp when I pulled the tape up. You definitely can’t tell unless you get up close, though.

I somehow managed to smear a little of Come Here on my ring finger, probably while putting on top coat…will I ever learn that patience is a virtue?

My pointer and pinkie fingers are topped with another fairly recent purchase, Rose of Light. It’s composed of rose gold hexes/micro glitter and small holographic square pieces, and is a pretty densely packed glitter. It’s really pretty! I’ve been into rose gold more and more lately, and this glitter is a nice, subtle way to add it in. 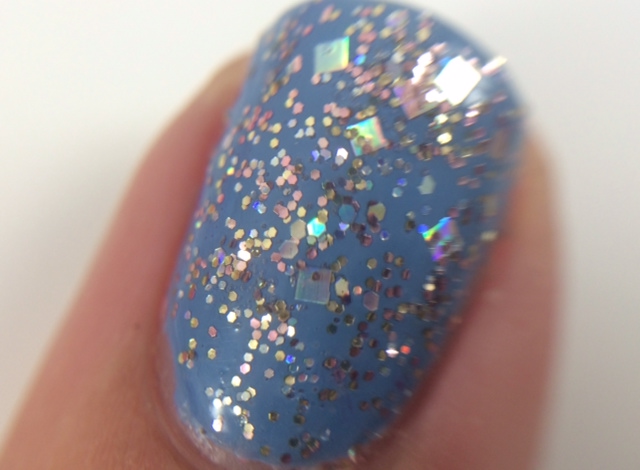 …and the sparkliness in this blurred .gif (I can never resist!).

P.S. The name “Come Here!” makes me smile because it reminds me of how Jenny Lewis says it in “Portions For Foxes.”

Daaaaaamn you guys, remember when summer used to be an empty wasteland for television? Sunday night I was typing up my Easter post and realized that later that night Mad Men, Orphan Black, Game Of Thrones, Veep, AND the new show Salem were all going to be on. I’ve been anticipating Salem because I thought it would be a hilarable cheesefest, but apparently Salem is going the Ryan Murphy “balls-out crazy” route. (Minor spoilers below!)

Oh man, I couldn’t stop laughing every time Shane West popped up – he just looked so out of place with long hair/period garb plus his character seemed to be incongruously modern compared to everyone else (it may have been his acting, though?). His love interest, the main girl Mary, is kind of coldly beautiful which I think works, plus I like that she goes from “sad young girl in love” to “bad bitch who owns the town and tortures her enemies.”

Puritans didn’t have a lot of fashion options, but there were still faboosh capes, apparently!
via

I was really startled at the random, pretty intense sex scene that came out of nowhere at one point, causing me to turn to my sister and confusedly ask, “Isn’t WGN the channel that edits out the word “poop” in its 30 Rock reruns?” And we watched it at like, 7 or 8 pm… You can’t even say things like “asshole” until 10pm, right? There were a lot of wtf moments though, from the literal frog in Mary’s husband’s throat (not to mention the thigh suckling???) to the possessed/haunted girl getting walked like a dog in the town square to the orgy of molasses people.

“We’re here to partyyyyyyy!”
via

I can’t quite tell if I liked this or not – I have a tendency to enjoy shitty/cheesy shows if they’re fun (see: Reign) but Salem isn’t quite “so bad it’s cheesy good,” yet it’s definitely not actually good… Jury is out, but I will give it a few episodes to see if they embrace the camp or take themselves (far too) seriously.

Anyone else get goodies from the Make It Stick sale or watch Salem? Let me know in the comments!

Thanks for reading! See you guys next time – A x