I haven’t done a dry brush in forever, I forgot how fun and easy they are! 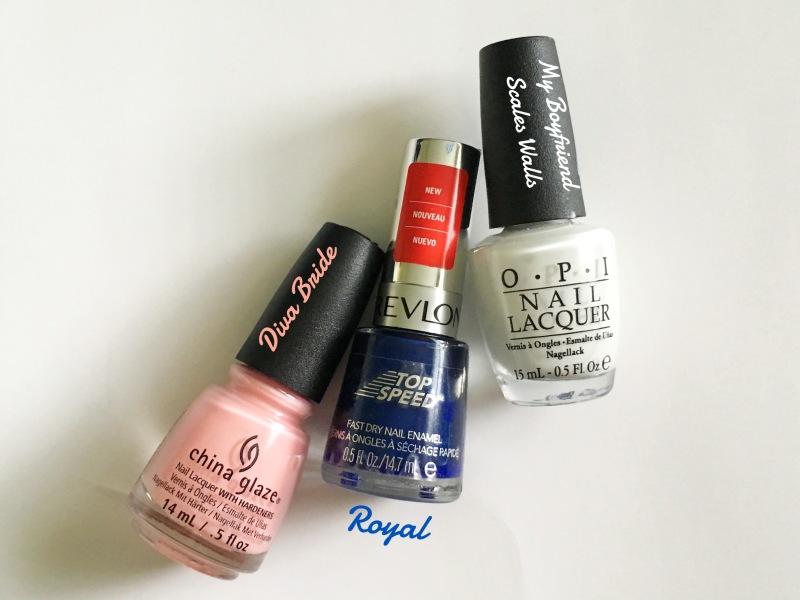 My sister chose the color combo – pale pink and cobalt – because sometimes I get way too overwhelmed with all the choices/possible combos and just can’t deal, ha. I did a base of MBSW because my Fourth of July mani made me remember how awesome it is as a canvas for nail art. 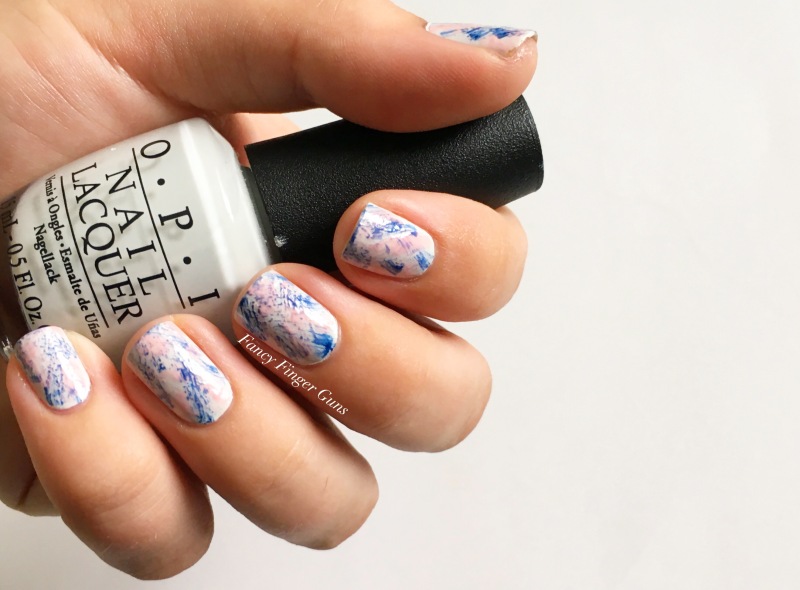 I’m not sure how I feel about the final result. I think the color combo looks very ’80s… Seriously, doesn’t this remind you of like, those satiny pale pink couches, neon light accents, and sketched lady art that was weirdly popular back in the day? I think if I had used a navy instead of royal blue it wouldn’t be so bad, but now I can’t un-see how ’80s it is! It’s making me want to watch Back to the Future or Miami Vice or something.

I wasn’t a huge fan of this, as you might be able to tell, so this will be a super quick post! Thanks for reading, and I’ll see you next time – A x

Fireflies in the Garden

I know a lot of people don’t like them because bugs = gross, but I just love fireflies!

I’ve never lived anywhere that had them but we visited our extended family in Pennsylvania a few times when I was little, and I remember being obsessed with the fireflies flickering all around me on those warm nights – I thought they were magic! I was thinking about those moments the other day and decided fireflies would be a perfect summer nail art design.

I wanted to do something with a deep blue sky that resembled the firefly scenes from Disney’s The Princess and the Frog (which has some terrible stereotypes, but honestly, the animation is maybe my favorite ever. It’s so gorgeous!), but I also wanted a nice, subtle gradient. I think I achieved that but like the genius I am, I accidentally did the gradient in the opposite direction I wanted when I started on my left hand. I fixed it on my right, but that means the design is flipped upside down on each hand!

I’m sorry, a few of these photos look super blown out and I’m not sure why.

I applied the grass with Posh using my dotting tool (I ordered brushes from Winstonia recently but they haven’t come in yet), then I added a few swipes of Holly-Day to try to add some dimension. I did the fireflies with my dotting tools also, although I do wish I had done less of the bigger dots.

Again, please forgive my tip wear and the freaking smearing of the dots from my dying Seche Vite.

My favorite nail is my right thumb for that very reason – the fireflies are all pretty small, so it really looks like they’re flickering in the distance. 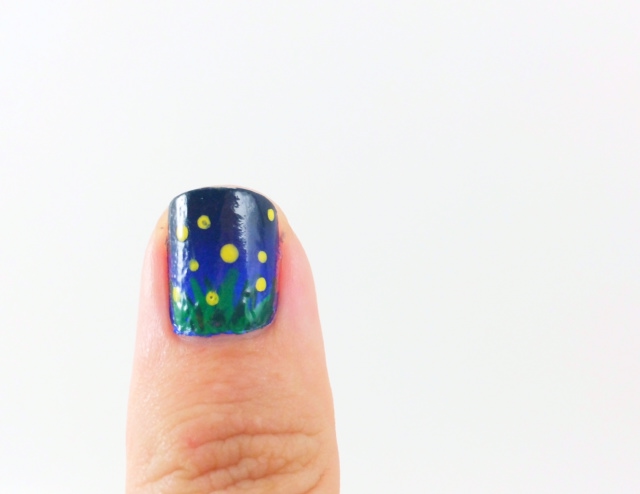 This would be perfect if not for the few dots that smeared. Seche Vite, whyyyyyyy?

My blingy pinkies (OPI’s My Vampire Is Buff with Milani’s Gold over it) are leftover from a previous mani I was trying out; I really like them, but I’m not 100% sure they go with this particular look. Hm. Overall, though, I really liked doing this – it was easy and fun to create, and I think they’re pretty adorable. 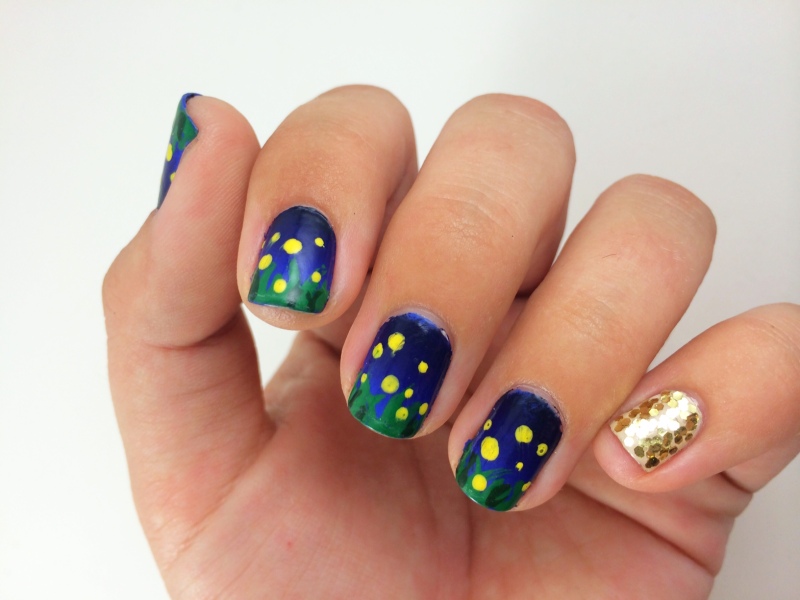 I don’t know why my pinky nails keep breaking, ugh.

If you like fireflies, do yourself a favor and check out this series the Japanese artist Yume Cyan did using long exposures. I can’t get over how gorgeous and magical this looks, I just adore it! I would love to get huge prints of these one day.

I hope you enjoyed this post (and that the design actually looked like fireflies…?)! Thank you for reading, see you next time – A x

I attempted to mimic malachite for today’s “nature” theme using water marbling. I don’t know what I was thinking! Water marbling has long been my nemesis and today’s attempt was no different than any of the other times I’ve tried – I got pissed, made a huge mess, and the final product wasn’t even worth it. Sigh. Polishes used:

I put one coat of Milani’s White On The Spot as my base, although in retrospect I should’ve used my lightest green color, since it was very sheer when I marbled with it and the white came through, messing up the effect on a few nails. I got all my supplies ready – cup of room temp tap water, millions of Q-tips, dotting tool, remover, tweezers, tape, and the polishes.

The huuuuuuuuge mess I made.

I taped around my nails for easier clean up (ha!), then unscrewed all the caps because time is essential in water marbling and started dropping colors in – I think at first I did lightest to darkest, but each and every single freakin’ time, after the third or fourth drop, the color refused to spread out. I jiggled the cup and sometimes the drop would spread a bit, but not over the whole water area like it’s supposed to.

Before I cleaned everything up. Check out how absolutely terrible my right hand is – at least you can see swirlies on my left hand.

I do think my thumbs looked really cool, though!

I experimented to see if it was a specific polish or combo, but it didn’t seem to matter. Eventually I just started putting a bunch of drops in close contact with each other, dropping other colors on top of those, and attempting to spread those out with my dotting tool. Sometimes it would work, sometimes the second I put my dotting tool in the water all the polish would wrap around the dotter and be un-useable, meaning I had to clean it out and start again. Plus, for some reason these dried with little bumps/bubbles, which has never happened to me before. Grrrrrrrr.

Water marbling is super hard because it takes so much work and makes a huge mess, but I keep attempting it because a few times it works and looks amazeballs. I’ve even looked at tutorials for “dry water marbling” but they seem to be just as much work. Sigh. It bothers me because this is something that should for all intents and purposes be easy, but I just can’t quite master it. At least it’s somewhat comforting to know that a lot of other people have issues with it, as well. 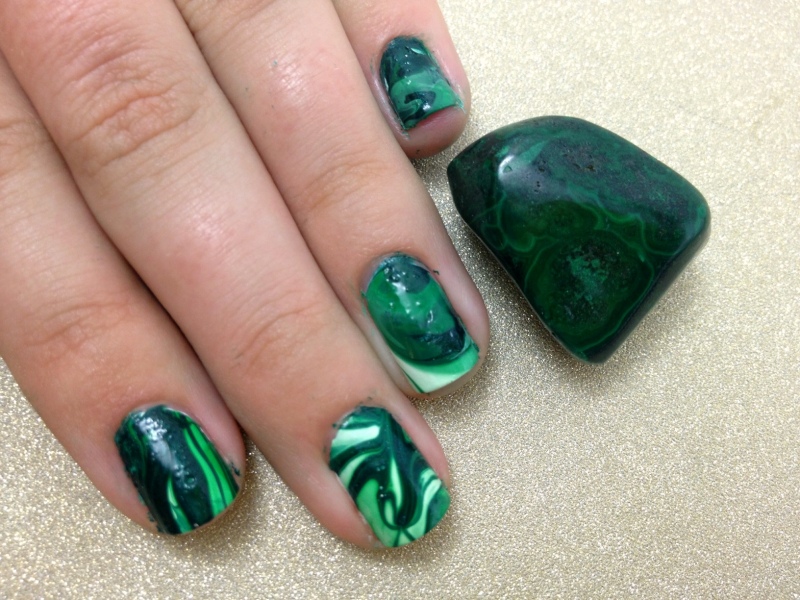 My own little chunk of malachite isn’t as vibrant or swirly, but it’s still pretty.

Bleh I’m so over this. I’ll probably keep my thumbs since I actually think those both turned out cool – of not exactly the effect I was going for – and paint the rest plain green. Ah well, better luck next time! Thank you for reading, see you next time – A x