Another quick little post here! I did these nails this past weekend, when temps were almost 90 here in LA. Yes, 90 degrees in February. Sigh. I’m not usually big on dark nail colors in general, but especially when it’s hot outside, I can’t bear to have anything besides bright hues on my fingertips, so I pulled out some of my favorites for this easy look.

I loooove Baker Street – the polish made famous by Beyonce a few years ago – but this polish chips on me sometimes within hours. The only other polish I have by Nails Inc is a glitter, so I don’t know if it’s the general Nails Inc formula or just Baker Street itself, but it’s very disappointing. The color is so lovely I can’t really complain, though! This is two easy coats (that chipped within a day:(). 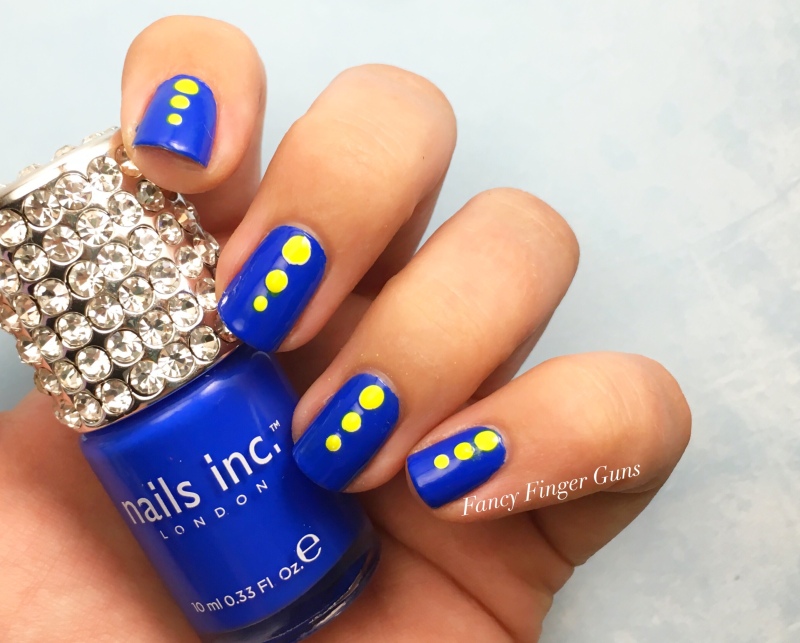 I used butter LONDON’s Cotton Buds and my dotting tools to make three graduated dots coming down from my cuticle. Once those had dried, I used the dotting tools to apply Essie’s In The Limelight on top. I really love how cobalt and neon yellow look together – I can’t remember where I first saw it, but it’s one of my favorite color combinations! 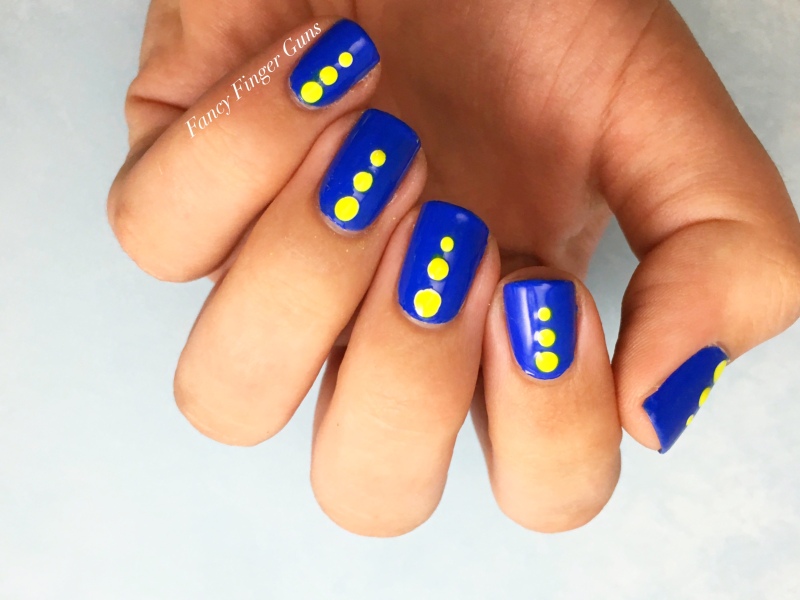 I know it sounds like I’m rubbing these LA temps while the rest of the country is drowning in snow, but trust, I am not enjoying it. Please send some chilly thoughts my way, and I’ll send some way-too-hot-for-winter vibes to you, too! Thanks for reading! See you next time – A x

Hi everyone! How’s your week starting off? I’m trying to post more this month, so today I’ve got a simple mani I did a few weeks ago. 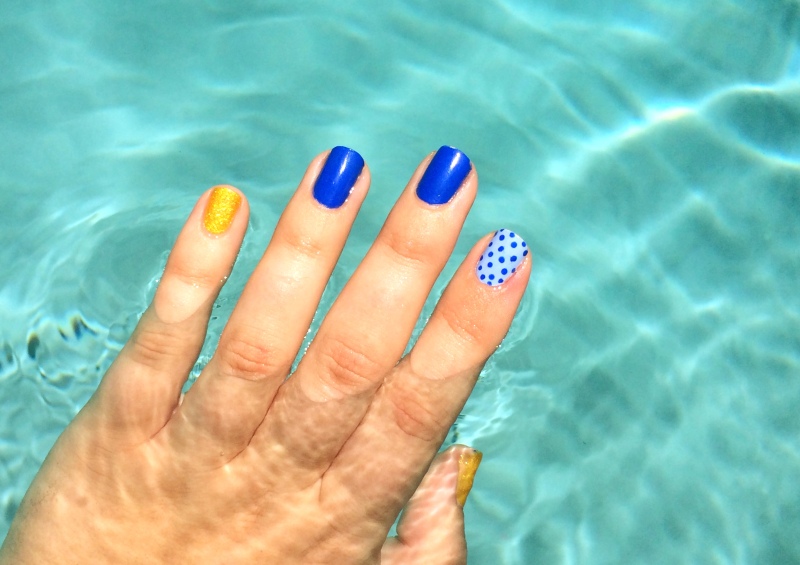 I forgot to take a polish bottle pic, oops!

I don’t think I’ve ever used this color combo before, but I really like it! Yellow and blue reminds me of French provincial style and that can be a little cutesy (sometimes almost verging on shabby chic, which I am not a fan of), so I didn’t want to do anything to frou frou and kept it simple with a dash of sparkle and a pop of polka dots. 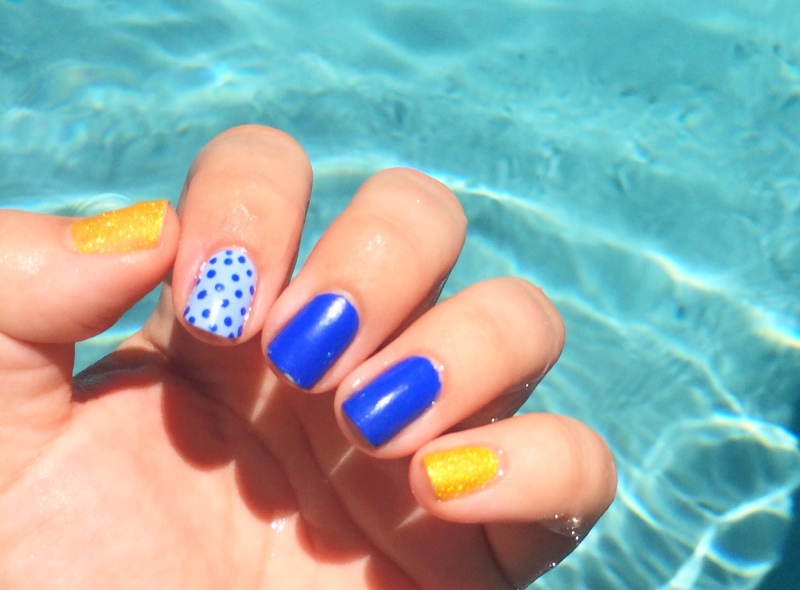 The yellow is Nicole By OPI’s Lemon Lolly, and it’s basically the same as the OPI’s mini You’re So Flippy Floppy except it’s a normal-sized bottle and it’s super sparkly. Yasssssssss! (I love me a yellow texture polish – this is now my third one!) The royal blue is everyone’s favorite, Nails Inc’s Baker Street, and the light blue is Essie’s Bikini So Teeny, which I’m having a love affair with right now despite its less-than-stella formula.

I couldn’t really get a good pic of how sparkly Lemon Lolly is, but trust, it’s gorgeous. If you like yellow and/or texture polishes, I got it a few weeks ago at Marshall’s, so it’s worth going by your local store to see if they have one you can scoop up. Overall, though, this was such a cute and easy mani, even if Baker Street chipped on me almost immediately. Perfect for a lazy Saturday in the pool, anyway!

Thanks for reading! See you next time – A x

Hi everyone! I’m sorry I haven’t posted in so long, I got a little busy, but I have something fun planned for June! If you’ve been reading this blog for any length of time, chances are you’ve seen me bitching about the heat… If I could find a place where the temperature never went about 75, humidity didn’t exist, and crisp autumn weather went on for half of the year, I would move there in a heartbeat. But until then, I have to deal with my least favorite season, so in an attempt to combat my heat-related grouchiness, I decided to make June a month of summer-themed nail art! I’m going to try a few techniques I’ve never attempted before and brush up on some dormant creative skillz in the process. I have most of the looks planned out and I’m pretty excited about them, and hopefully I will concentrate on this fun nail art project and not the temperature inching higher and higher.

I actually attempted a red gingham look for the first manicure of the month, but it turned out hilariously terrible. I started over from scratch and I like this look a lot better, anyway – plus I only needed two polishes:

The “shark bite manicure” was done for The Blonds’ runway a few seasons ago, and I’ve always wanted to try it out because it seemed pretty fun and – more importantly for my lazy self – easy. A shark-themed look also fit in with this month’s prompt, since Jaws is the definitive summer blockbuster, after all!

First I did two thick coats of Snow Me White, added top coat, and ended up wearing just white nails for a day because I kinda liked it, but if you’re trying this out yourself, let your top coat dry for at least an hour before you attempt the tape step – it’s the worst when you remove the tape and all of the polish comes off your nail with it. Next, I cut jagged angles that slightly curved inward into some tape pieces, and applied them jagged side in on the same side of each nail.

My first attempt at a tutorial.

My third step was quickly but carefully painting one thick coat of Baker Street, making sure it was fully opaque so no white showed through. Then I immediately removed the tape and waited probably fifteen minutes before adding top coat, as I’m always afraid of smearing. Finally, I did my clean up, as you can see below!

I really love the final result! After my gingham fail I was so disappointed and annoyed that I seriously considered scrapping my whole plan for this month, but after all, I did start this blog to try new techniques and designs, so some failure is par for the course. This fun look more than made up for it, though!

I did a claw to be more ferocious but I guess it doesn’t really work when you’re trying to evoke a shark, does it?

Any thoughts on this mani? Have any of you tried this out yourself? I’d love to hear about it!

Not sure which idea I’m gonna try next, I guess it depends how ambitious I’m feeling, but I definitely have some fun, bright looks planned. Thank you so much for reading! See you next time – A x 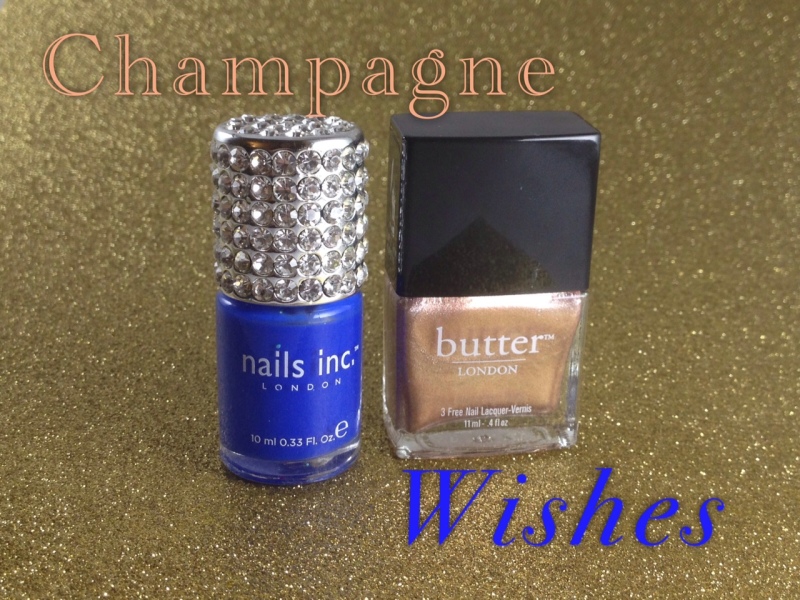 So full disclosure, I have a bit of love/hate relationship with Butter London – they chip pretty quickly on me; the price is ridiculous, especially since it’s less polish than mainstream brands like OPI and China Glaze; and the formulas on a lot of the colors I have leave a lot to be desired, which is inexcusable for the price. But some of the colors are really great and unique, I do love the bottle and brush, and obviously as an Anglophile I appreciate the names (although they do seem to be stretching a bit now – Cotton Buds?). That being said, BL’s metallics are some of my favorites because the formulas are fantastic, which is the case with Champers here. 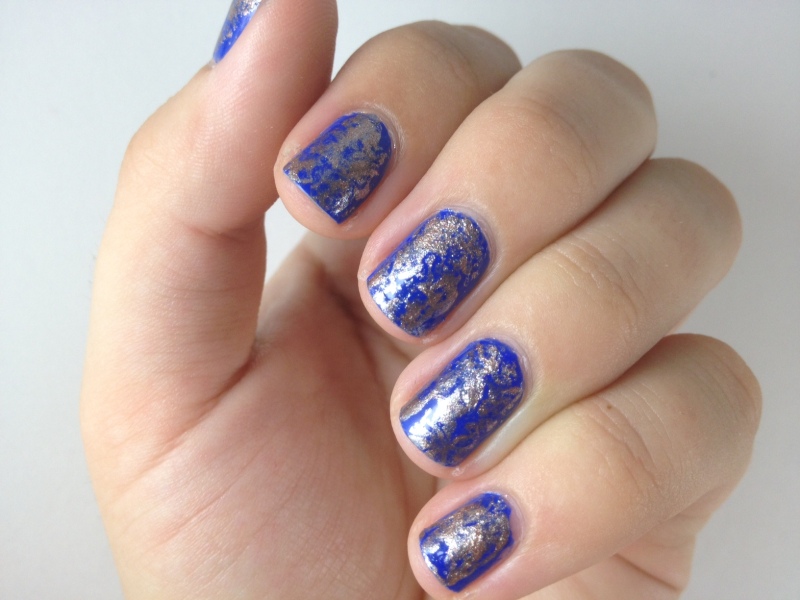 I decided to pair two fancy polishes together – elegant Champers and my iced-out bottle of Baker Street. I got this bad boy a year or so ago when Sephora had a few select colors with this cap for $10, which is only 50 cents more than what a bottle of Nails, Inc. polish costs normally – how could I pass that up? I haven’t worn Baker Street in months, so it was definitely time to revisit! 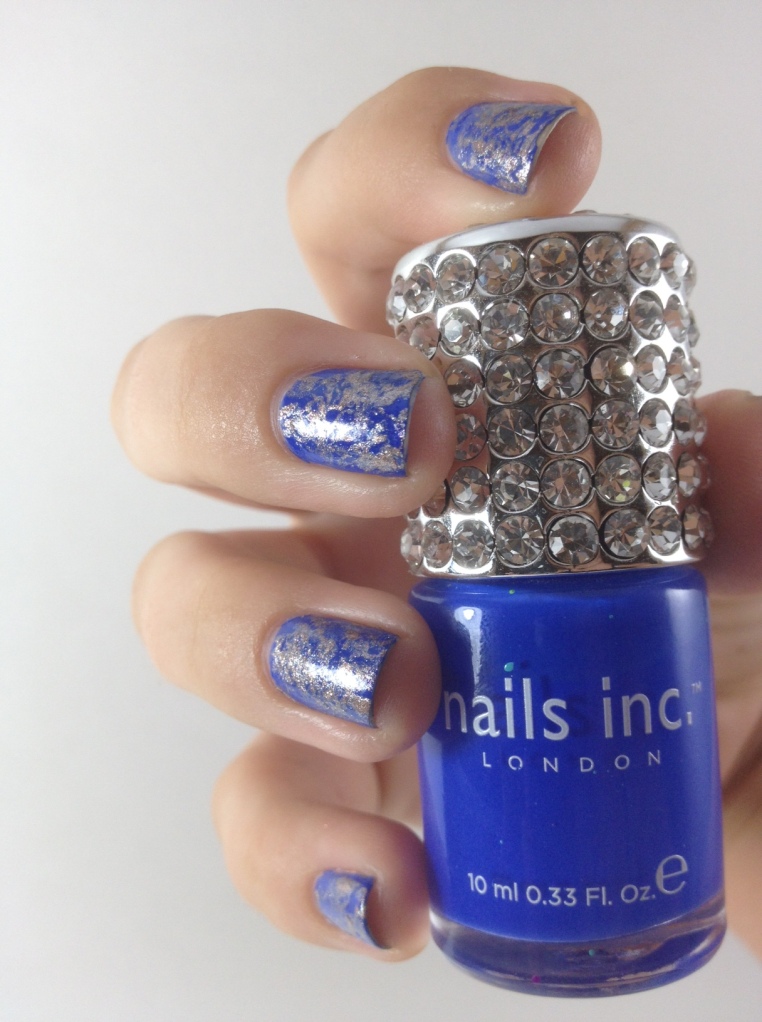 Awkward claw hand! But look at Baker Street. SO BLUE, Y’ALL. Ooh and sorry for those chips, this is a few days old.

Closeup so you can see that despite sort of looking like crackle polish, this mani is actually really nice and smooth – crackle polishes can still have texture even after a few layers of top coat.

This was the fastest mani EVER. Baker Street dried really quickly and it’s almost opaque in one coat (I’ve definitely done one before when I was being really careful) so basically I painted one round of polish and by the time I finished it was ready for a thin second coat. Then I took a tiny piece of tin foil since I didn’t have any Saran Wrap and balled it up, dipped it into a little splotch of Champers I put on some paper, and gently dabbed it on my nails. I’ve never done this kind of manicure before, and I didn’t know if there was a trick to balling it up or if the harsh foil would mess up the base coat, but I think it worked out great! Champers dried quickly, too, and then I did a light coat of Seche and my nails were done in record time. I can’t quite decide what color Champers is – it doesn’t seem pinky/peachy enough to actually be rose gold like the website claims, yet it’s also too light to be copper – but it’s lovely and also perfect for the upcoming holiday season. I tried to get a good macro so you can see that it’s not just a straight metallic, either; there’s the tiniest green and pink shimmer to it. You can sort of see it in the blurred pic below:

It’s easier to catch in sunlight but you can kind of see the pink/green sparkles here.

Okay, can we just talk for a second about how amazeballs my cuticles look?! I’ve been using this Sephora by OPI cuticle cream that was on sale for $4.50 (I actually got two of them) and it’s AWESOME. Nice light smell; you only need a little bit at a time; it’s really hydrating but also exfoliates away excess cuticles, which is great for me because I apparently suck at the usual cuticle-removing products)…the only problem is it’s so cheap because Sephora is discontinuing that line. :( I’m pretty sad it’s being discontinued but let’s be real, I wouldn’t have even tried it at $9 a bottle (let alone $14 #cheapbitch). I should try to grab a few more bottles this weekend. It’s seriously holy-grail status for me. My cuticles are dry as hell so I do have to use it sometimes more than once a day, but it works really well as you can see, so I highly recommend it and if you can still find it in stores, at $4.50 you can’t really go wrong.

Champers was a actually birthday present from a friend – thank you so much, T! I also got a bottle of real champers to go with my polish, so I will probably be breaking into that this weekend…maybe I’ll try out a cocktail with champagne in it, I’m sure I have one somewhere on my boozy Pinterest board.

I hope you enjoyed this post! I wish all of you a lovely glass or three of champers and a fantastic weekend. See you next time! A x